A Force for Good

Columnist Michael Hiltzik wrote a piece in the LA Times the other day calling economists’ opposition price-gouging legislation wrong “both morally and economically.”  By pure coincidence, I addressed the “moral” argument yesterday on this blog.  Allow me now to respond to a very large economic error he makes.

Another factor commonly overlooked by defenders of price gouging is that natural disasters tend to be (1) short-term and (2) not amenable to rapid response by market forces. If there’s no physical way to get a new supply of bottled water into some part of Houston, then allowing unrestrained price increases won’t produce a larger supply. Retailers lucky enough to have a few cases in the back room when the crisis hits, however, will reap a windfall. But who does that help, except the lucky retailers?

Strictly speaking, he is correct that natural disasters tend to be short-term, at least the disaster itself.  It may also mean that it is not amenable to a “rapid response by market forces.”  But that doesn’t necessarily mean that anti-price-gouging legislation is the way to go.

Take a look at the following diagram: 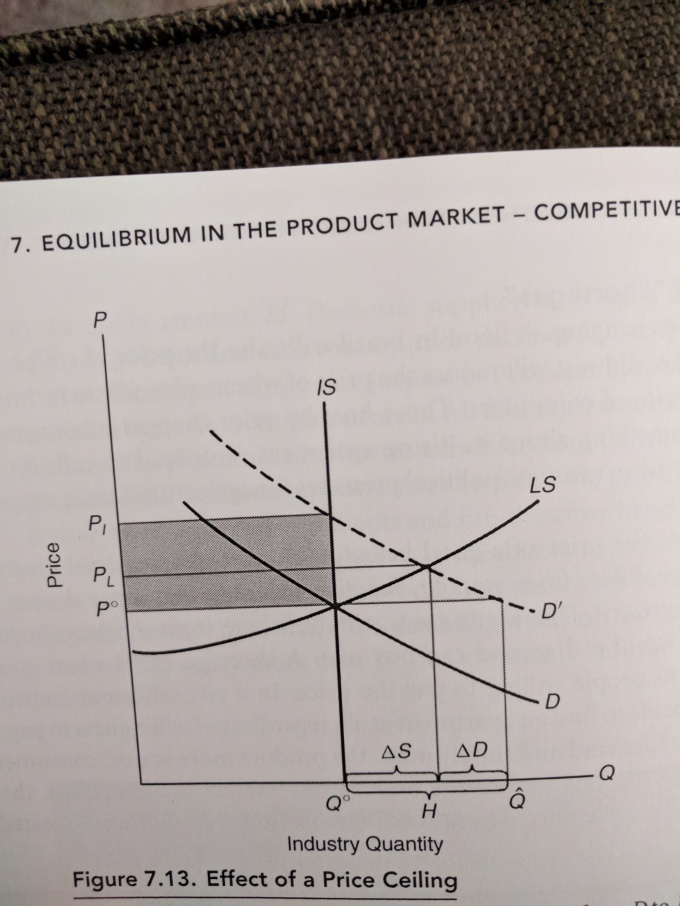 This is just your standard supply and demand chart with price on the vertical axis and quantity on the horizontal.  Let’s assume that curves IS (Immediate Run Supply Curve) and D (Demand) are immediately before Harvey hits Houston.  Immediately after, demand shifts to the dashed D’ curve.  IS doesn’t immediately change because there are now frictions (ie flooded roads) preventing new supplies coming in.  The price level now rises to PI (the intersection where the D’ curve intersects IS).  This increase in price is what people call “price-gouging.”  The “lucky few” retailers who have the inventory on hand may enjoy a brief windfall.  This is where Mr. Hiltzik’s analysis ends.  What he doesn’t consider is what happens as we move away from the immediate period and into the longer run (the days that occur after the disaster).  Higher prices induce more supply to the region, especially as entrepreneurs discover ways to overcome the physical barriers preventing supplies from arriving.  And, as the Second Law of Supply says, the longer prices stay relatively high, the more elastic the supply curve becomes.  We see the development of the LS (Long-run Supply curve) in the diagram above.  If there is no interference in the market, we now see increased supply in the market (represented by the delta-S section in the above diagram).

However, Mr. Hiltzik demands a price ceiling to be imposed to prevent this higher price level.  On the above diagram, that is represented by the original price level, Po.  In the immediate run, there is no deadweight loss to the community stemming from the price ceiling (eagle-eyed readers will notice this is identical to the question from my microeconomics comprehensive exam from three weeks ago).  There is no deadweight loss, but there is a shortage, represented by area H on the above diagram.  However, what is important to note is that with the price ceiling enforced, even as the supply curve becomes more elastic and more supplies can make it into the devastated area the shortage does not disappear!  No additional supplies make it into the market despite the need!  The quantity the market supplies never shifts off of Qo.  Nota bene: This means that, so long as the demand for goods and services are higher than the pre-disaster level (ie, so long as disaster conditions persist), there is a persistent shortage of needed goods in the market! This stands in stark contrast to the increase in supply created when prices are allowed to adjust.

In short, Mr. Hiltzik’s analysis is too short-sighted.  He looks at just the immediate run (which is dire) but fails to account for anything beyond that (including the very next day).  And we are already beyond the IS curve for Harvey; the supply curve is becoming more and more elastic every day.  And it is becoming that way because of the price signal.  Even in the immediate run, anti-price-gouging legislation has major negative consequences.

I’d also like to add that the situation described above is probably a bit optimistic.  In all likelihood, following Harvey, we saw both an increase in demand (D’) and a decrease in supply (a shift from IS to an IS’ curve somewhere to the left of the IS curve).  So the shortage, H, caused by the price ceiling would likely be larger than depicted here.

12 thoughts on “The Short-Sightedness of Anti-Price-Gouging Legislation”