A Force for Good

Writing at FEE.org, Dr Steve Horwitz has an excellent article on the gender pay gap (word of advice, always read Horwitz).  This part in particular stands out:

You’ll notice that I said “the clear majority” of the gender wage gap is explained by factors other than discrimination, but not all of it. The consensus of the economic studies is that there is still about 3 to 5 percentage points of the 20 percent, or roughly 15 to 25% of the gap, that cannot be accounted for by economic differences and that might well be due to discrimination.

So it is not a myth that there might be discrimination in labor markets. Even the economic studies that show that most of the gap is explained by other factors do not say that all of the gap can be accounted for by such things. Although the economic studies don’t test directly for discrimination, the fact that other kinds of studies suggest that it exists in labor markets is consistent with the existence of an economically unexplained portion of the gap.

The most accurate summary is something like the following:  “It’s a myth that women get paid only 80% of what men do when they have the same skills and experience and are doing the same work, but it’s also a myth to claim that economics shows there is no gender discrimination in labor markets because studies show that economic factors cannot explain all of the gender wage gap.”

The nuance of this argument stands in stark contrast to the graphic below, originally published by “Anarchyball” on their Facebook page: 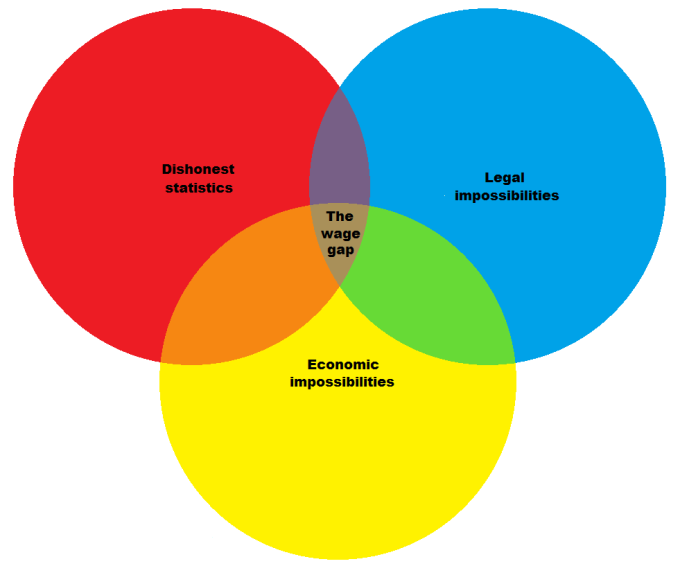 I know Anarchyball is a Facebook activist group, and thus aren’t a standard of academic integrity but rather going for pithiness, but the error they make is still important.  Note that they list the “wage gap” as part of the set of “economic impossibilities.”  But, as Steve Horwitz notes, not all of the gap is explained by economic factors.  It is possible (maybe even probable) that the unexplained portion is partly due to discrimination.

Discrimination is more costly, yes, but it is not impossible (just like an Jaguar is more expensive than a Honda, but people still buy both).